Its been a good 15 years, but for obvious reasons I am leaving. Catch me on Dreamwidth, same name.

But it is also not a priority. I don't know what to put here.

My life has had its ups and downs recently, and has been really busy in places, and boring in others. Maybe I will write more later.

So far today: one mini can of Coke Light, one big can of ginger ale, a Marraqueta, a bag of Quaker Oat cookies.

Well that's the synopsis. I got very sick and felt very uncomfortable. Then on the last day of my trip I perked up. And now, waiting in yet another bus station, I'm sad.
My feelings make no sense and my life moves too fast. 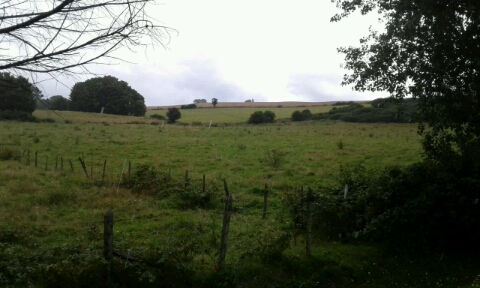 I don't remember much, now, about when I moved to Salem.  (Or around Salem: let's skip the details). Mostly because in the years since, as I became aware of the area and then got Google maps and then understood every square mile based on US census data, it got smoothed into the great I5 corridor. So I really can't remember now what it was like to move a whole 70 miles south. This was as far south as I'd ever been. It's impossible to know what my focal length was like then.

Besides once again I'm further south then I've ever been. And I spent today walking through rainy green fields that look so much like those Marion County Roads. And I probably got a feeling, vaguely, of what it felt like that first summer in 1988 to be looking out the window of whatever Toyota my mother was driving and see those fences and trees and hills.

I'm on a bus going south for my vacation. There is a bit of anxiety as always because I'm heading into the unknown. But I feel encapsulated as I look out at the dark and see the miles slide by.

Mostly this makes me look forward to the day when I can go from Whitehorse to Puerta Arenas by bus.

I just bought myself a box of chocolate fudge covered Oreos, and am about ready to eat Oreos and internet and ignore the world and gradually get rid of my hangover. My vacation has been kind of slow, other than my trip up Cerro San Cristobal to see the tarantulas.

Anyway! I have a long history of doing this, of having periods where I basically cocoon and stare at a screen and don't think about the outside world. I often romanticize those periods afterwards, thinking of them as meditative, stress-free periods where I allow my mind to be untouched by what is going on outside. While I am in them, though, they often seem stressful, with me feeling I should do more and balancing boredom and anxiety. Such is now, really. I feel I should be doing something but don't want to, and don't even have the concentration to fulfill my goal of watching The Regular Show.

Periods of cocooning like this are probably best when there is some type of nascent thought or experience going on, under the surface. And maybe one is...I am not sure. My mind feels scattered.

Next week I am taking a two week vacation. It is summer here, and most of my students are on vacation, so my vacation will coincide with them.

There were a couple of slack periods in the spring when I had very little to do (September and October), and I had some (at the time) boring five and six day weekends, but in general, I've not had a time when my mind wasn't preoccupied with work since early May, when I started my first class. Combined with the steep learning curve of a new job and a new country, its certainly been a lot of work. It might be the first time in my life that I've been inside the work tunnel that is so familiar to some.

Anyway, I am hoping that over the next few weeks I can kind of take some perspective on my situation. Perspective is lacking for me, things have gone so fast that I don't really understand the incredible changes that have been made in my life. But, I still have...four more days of work.

My prime television years were about 9 to 12 years old, I think, which corresponds to the years 1988 and 1991. I watched television before that, and after that, but those years were when I was a television watcher.

When I was a child, we often didn't have a television, and when we did, it was second hand and didn't last for long. I don't remember the exact years. I remember stretches of no television. I would watch TV at friends or relatives houses, but I remember also being somewhat left out when my friends talked about TV.

When we moved from Battle Ground to near Salem was when I remember watching a lot of TV. In those days, before cable, the distance (about 60 miles) from Portland meant that we had a weak signal, and of the five or six stations available, usually half of them showed up. The late 80s and early 90s were the last tie when Domestic Situation comedies were the basis of prime time TV. I don't remember watching a lot of them. For some reason, either because of reception or because of some sense of my proper domain, I mostly watched syndicated TV, which was carried on two channels, and the new programming I did watch was more the non-family comedies. I really liked Night Court, for example.

In those days, to know what was on television we used tv guides, either the name brand TV Guide that you bought, or the free ones that you could get in the checkout aisles. TV Guide was 75 cents, and the free ones were free. They also had TV listings in the newspapers. Between these three sources, I could navigate a course for television. Like many of my other hobbies, I could get obsessive: I remember at times looking at the schedule and planning like six hours straight of television viewing. Many of my leisure activities become overly scheduled and goal-driven.

Looking back at it, the times of maximum television watching seemed long, but they might have only been something I did for a month or so, before another hobby intruded. Looking back at it, television probably had a lot to do with stress and isolation, neither of which occurred in Battle Ground. Those years were when I first experienced my cocooning instinct.

I could probably have more to say about television, but that is it for now.

Do you know what I could make a long post about?

My history with television.